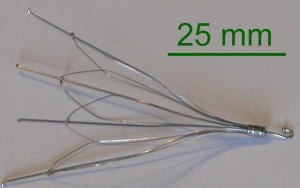 A retrievable inferior vena cava (IVC) filter is small, metal, cage-like device that is surgically inserted into a vein to prevent blood clots from travelling to the heart. It is used in people who are at risk for pulmonary embolism (PE), but cannot take the anticoagulant drugs normally used to prevent dangerous clots, and in cases where anticoagulant drugs are ineffective. When an IVC filter migrates, or if it fractures and pieces migrate, to other parts of the body it can cause serious or fatal complications.

IVC filter failure includes migration of the entire device or fracture of the device allowing pieces migrate to the heart or lungs. The Journal of Medical Cases reports that symptoms of IVC filter migration to the heart include:

IVC filter migration to the heart can cause fatal cardiac arrest.

In August, 2010, The U.S. Food and Drug Administration (FDA) announced that since 2005 it had received 921 adverse event reports involving IVC filters:

A 2014 update from the FDA noted that it had received reports of difficulty removing the devices. The FDA also notes that long-term risks of IVC filters include deep vein thrombosis (DVT) in the lower limbs, and IVC occlusion.

According to a report in the Journal of Vascular Surgery, the rate of serious complications with IVC filters is greater than 30%, and 3.7% of patients die. According to the report, the IVC filter can perforate adjacent organs.

When are IVC Filters Used?

IVC filters are used to prevent PE in people who cannot tolerate anticoagulant drugs, commonly referred to as “blood thinners”, for reasons such as:

They are also used in people who have tried anticoagulants and still experienced DVT.

The risk of serious or fatal complications from IVC filter increases over time. Retrievable IVC filters are designed to be removed once the risk of PE has passed. The FDA recommends removing the device “between 29 and 54 days after implantation” if the risk of PE is no longer an issue.

If you have been implanted with an IVC filter, discuss you concerns about complications with your doctor and make a plan for timely removal of the device. If you experience symptoms of IVC filter migration, seek immediate medical attention and inform medical personnel that you have an IVC filter.

According to a paper released by The Global Commission on Drug Policy, there are … END_OF_DOCUMENT_TOKEN_TO_BE_REPLACED

Blood is pumped from the heart to the rest of the body through the arteries. The … END_OF_DOCUMENT_TOKEN_TO_BE_REPLACED